1. FESTIVALS: BHAGWAN DATTATREYA JAYANTI: Bhagwan Dattatreya Jayanti is a festival commemorating the birth day of the Bhagwan Dattatreya (Datta), a combined form of the divine trinity of Brahma, Vishnu and Shiva. It is celebrated throughout the country on the full moon day of Margashirsha ( December 7 this year). 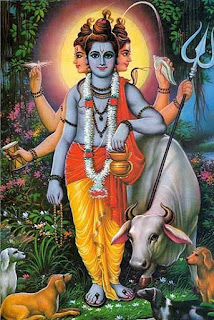 Bhagwan Dattatreya was the son of sage Atri and Anusuya. On Datta Jayanti, people take bath in rivers, observe fast, and do puja & bhajans. Bhagwan Dattatreya’s six hands hold Shankha, Chakra, Gada, Trishul, Kamandal, and a bowl. Some of Bhagwan Datta’s important temples are located at Gangapur in Karnataka, Narasimha Wadi in Maharashtra, Pithapuram in Andhra Pradesh, Audumbar in Sangli and Girnar in Saurashtra. -GoTop


2. ALL PEOPLE OF BHARAT ARE HINDUS : MOHAN BHAGWAT: On November 15, Rashtriya Swayamsevak Sangh (RSS) Sarsanghachalak Dr Mohan Bhagwat said that all people of Bharat who consider Bharat as his motherland is a Hindu irrespective of any religion. He added that this is the reason we have been united for hundreds of years and Sangh speaks this truth out. He said this while addressing a public meeting at Ambikapur in Chhattisgarh’s Surjuga district.  He also said that joining sangh is the best way to understand Sangh and one can only know the Sangh by coming to the Shakha. The Sarsanghachalak also paid homage to Bhagwan Birsa Munda and  unveiled the statue of Kumar Dilip Singh Judeo. -GoTop


3. BREAKING FOUR ECOSYSTEMS KEY TO BHARAT’S RISE: ARUN KUMAR: On November 17, RSS Sah Sarkaryavah Arun Kumar expressed concern over the way anti-Bharat forces have been working against the interest of the nation.  He said that while the ideas of the Sangh are accepted and adopted by the people, Maoists, cultural Marxists, Islamists and global capitalists have set up an ecosystem against Hindutva and Bharat to impose their views on the mainstream. He was addressing the inaugural session of a three day conference on ‘Education System in India’ organised by Shiksha Sanskriti Utthan Nyas (SSUN).  Atul Kothari, National secretary of SSUN explained the idea behind the third edition of Gyanotsav, focusing on implementation of NEP-2022. Speaking at the event, Union Minister of Agriculture Narendra Singh Tomar underlined the importance of education in the country’s development. -GoTop


4. PM MODI INAUGURATED 'KASHI TAMIL SANGAMAM': On November 19, Pradhan Mantri Narendra Modi inaugurated a month long 'Kashi Tamil Sangamam' in Varanasi to rediscover, reaffirm and celebrate the age-old links between Tamil Nadu and Kashi. More than 2500 delegates from Tamil Nadu will visit Kashi over a one month period. While inaugurating the Sangamam PM said that Kashi and Tamil Nadu were two cultures closely associated with Lord Shiva and the confluence of the two places was as sacred as the Sangam of Ganga and Yamuna. Uttar Pradesh  Chief Minister Yogi Adityanath, Governor Anandiben Patel, Union ministers Dr L Murugan, Dharmendra Pradhan, MP Ilaiyaraaja were also present on the occasion during which Ilaiyaraaja enthralled the audience through his recitals. -GoTop 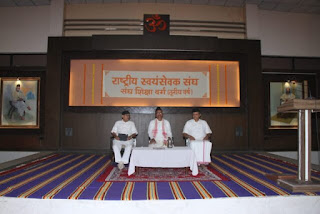 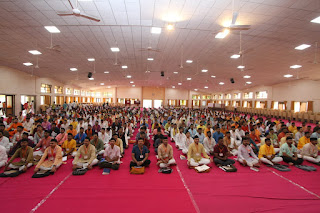 While addressing the participants gathered from across the nation, Arun Jain, Palak Adhikhari of the varg, highlighted the importance of Sangh Shiksha Varg in Swayamsevak’s life. He said that trained Swayamsevak’s have a big role in social change. The faith and curiosity towards Hindutva and Bharat has increased in the world. The importance of the virtuous Bharatiya way of life has also come to the fore during the Corona period. Favourability towards Hindutva has increased. In such a situation, the responsibility of the swayamsevak’s increases and they are trained for it through Sangh Shiksha Varg. 632 swayamsevaks are undergoing training in this 25 day Varg. -GoTop


6. 400TH JANMAJAYANTI OF LACHIT BORPHUKAN CELEBERATED: On November 25, Pradhan Mantri Narendra Modi addressed the closing ceremony of the year-long celebrations of 400th birth anniversary of Lachit Borphukan. During the event in New Delhi, PM Modi also released the book - 'Lachit Borphukan - Assam's Hero who Halted the Mughals'.
Lachit Borphukan was the General of the Royal Army of the Ahom Kingdom of Assam who defeated the Mughals and successfully halted the ever-expanding ambitions of the Mughals under Aurangzeb. 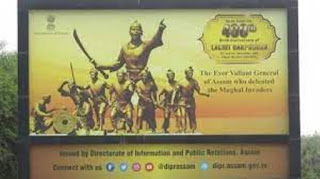 On November 24, Home minister Amit Shah evoked the need to rewrite Bharat’s history to free it from distortions. He stated that a nation which does not derive pride from its glorious past and does not garner inspiration from its heroes can never create a bright future for itself and cannot create better citizens Urging historians and history students to identify 30 great empires of Bharat and 300 warriors, Shah said writing extensively on these warriors who showed exemplary valour to protect the motherland will bring out the truth and the distorted historical narratives will vanish on their own.
He was speaking at a plenary session of the 400th birth anniversary of Lachit Barphukan. Shah said that the 400th year of Lachit Borphukan’s Jayanti has unveiled the stories of all the valorous heroes of Assam before the students of history to research and explore. These heroes includes Maharaj Prithu of Assam who defeated Bakhtiar Khilji in 1206 to Lachit Barphukan who defeated Mughals in 1671. -GoTop


7. SC: FORCED CONVERSION TO IMPERIL NATIONAL SECURITY: The Supreme Court on November 14 said that forced religious conversion may pose a danger to national security and impinge on the religious freedom of citizens. The apex court warned a “very difficult situation” will emerge if proselytisation through deception, allurement and intimidation is not stopped and asked the Centre to step in and make sincere efforts to tackle the “very serious” issue.
The apex court was hearing a plea filed by advocate Ashwini Kumar Upadhyay seeking direction to the Centre and States to take stringent steps to control fraudulent religious conversion by “intimidation, threatening, deceivingly luring through gifts and monetary benefits”. -GoTop 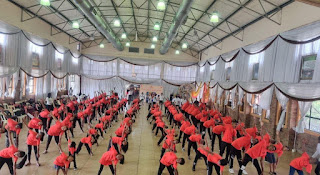 On November 26, a path-sanchalan with ghosh was performed at Village Triolet. Around 130 people attended the samarop function on November 26. The highlight of the Samarop was demonstration of sharirik learned during the SSV. Chief guest of the Samarop Shri Govind, Chairman - Mauritius Sanatan Dharma Temple Federation, appreciated HSS activities and mentioned the need for such activities on a regular basis among the youth. Shri Jagan Mohan, HSS Pracharak, highlighted the global presence of HSS and the importance of sanskars. HSS Mauritius Karyavah Pawan Beekam and Sahsanghachalak Dr Riwij Oodum were also present on the occasion. -GoTop


9.  HINDU CIVILIZATION EXHIBITION, DARSHANA, CONTINUES TO BE WELL RECEIVED AT STATE CAPITOLS: The Hindu Community of Illinois held an exhibition, "Darshana – A Glimpse into Hindu Civilization," at the Illinois State Capitol Building in Springfield, Illinois, on November 15. 
10. RAMAYANA VAIBHAVAM CONTEST CONDUCTED: On October 1, South West Vibhag of Hindu Swayamsevak Sangh HSS USA organised 16 different contests for baal and shishus based on 16 Kalyana Gunas of Shri Rama with the aim to learn and imbibe the qualities of Shri Rama. 110 children participated in these contests and six new families were introduced to HSS.

' Ramayan Vaibhavam' contest was a unique for the fact that it focused on gunas rather than just the story of Ramayana. The activities for the contest included interviewing parent and grandparents regarding the gunas, talking about the gunas, categorising action scenarios as right/wrong, identifying incidents from their lives when such gunas were demonstrated and video, card and poster making. Along with the children even parents and grandparents were involved in discussing the gunas. Parents were happy to note children were able to relate to the gunas in their day to day lives. -GoTop


11. HSS DALLAS-FORTWORTH: SEWA DIWALI: On November 12, Plano Police Department helped the Sewa Diwali Dallas team with a mega food drop-off at the North Texas Food Bank.  More than forty communities in over sixty vehicles donated around 27892 pounds of food. HSS-SEWA volunteers of Dallas-Fortwoth worked together with multiple communities and Hindu American organizations to bring food to those in need.  Plano Police Department thanked HSS and Sewa International for coordinating and bringing all the communities and organizations together for this drive. -GoTop


12. OVER 40 MISSIONS HEADS VISITED CELLULAR JAIL: On November 25, more than 40 mission heads and international organisations visited Andaman and Nicobar Islands for the G20 curtain raiser. The delegates took a tour of the Cellular Jail where author and ideologue Veer Savarkar was lodged by the British. G20’s Bharat coordinator Harsh Vardhan Shringla and G-20 Sherpa Amitabh Kant accompanied the delegates during the tour. 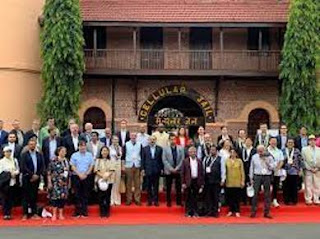 Shri Kant said that the journey was started from Andamans because unsung freedom fighters of Bharat were imprisoned in the cellular jail there and so it was thought fit that many of our freedom fighters should tell their stories to all the foreigners and ambassadors, as well as leading international organisations and all the invitees. British High Commissioner to Bharat Alex Ellis said, “Cellular Jail, Port Blair is a part of the past here. It’s important for someone in my position to bear witness and acknowledge some of the shameful acts perpetrated there. It’s a place I show respect to and understanding of.”-GoTop


13. AYURVEDA DAY CELEBRATED IN BALI: In October, International Ayurveda Day with the theme of ‘Every Day, Everywhere Ayurveda’ was organised in Bali by International Centre for Cultural Studies in association with Universitas Hindu Indonesia, Fakultas Kesehatan Ayurweda UNHI and other organizations. 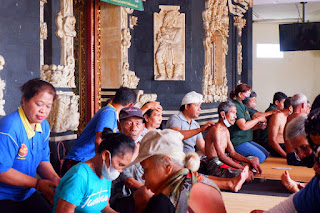 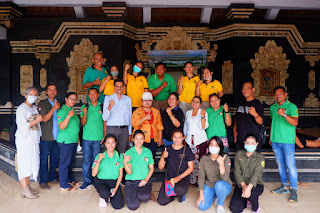 This event was intended to introduce Ayurveda and Usadha Bali to Balinese community and raise public awareness about living in harmony with nature through traditional medicine. -GoTop 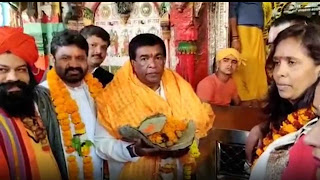 The President also inspected the grand Ram temple being constructed in Ayodhya and was briefed about the construction updates. He also visited Hanuman Garhi, offered prayers at Kanak Bhawan and inspected Ram Ki Paidi with a boat ride in the Saryu river. President Roopun visited International Ram Katha and was presented a model of Bhagwan Ram temple and a prototype of Veena installed at Lata Mangeshkar Chowk. -GoTop


15. BHARATIYA CANADIAN APPOINTED VICE CHANCELLOR OF MCGILL UNIVERSITY: Bharatiya-origin academic H. Deep Saini has been appointed as Montreal-based McGill University’s 18th Principal and Vice-Chancellor, and will begin his five-year, renewable term from April next year. Saini, who grew up in Punjab, is currently President and Vice-Chancellor of Dalhousie University in Nova Scotia. 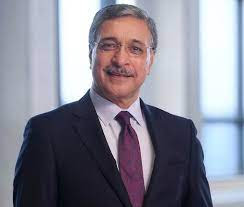 Saini completed his Master of Science (Honors) in Botany from Punjab Agricultural University in Ludhia Australia and a PhD in Plant Physiology from the University of Adelaide. He has earned several awards and recognitions, including honors from the Canadian Society of Plant Physiologists, Nanjing University, Queen Elizabeth II Platinum and Diamond Jubilee Medals, in recognition of his service to education and Canada.-GoTop


16. BHARATIYAS STUDENTS INCREASED IN USA AND UK: The number of Bharatiya students in the United States increased by 19 per cent over last year to two lakh, according to an annual Open Doors report released by the Institution of International Education on November 14. The report, sponsored by the US Department of State, reveals the trend of international student exchange for the academic year 2021-22.
Surpassing Chinese nationals, Bharatiya students have now become the largest group of foreign students in the UK, according to the recently released latest Immigration Statistics Report. The data shows that there has been a 77 per cent increase since 2019 in study visas of Bharatiya students. The UK Home Office data collated by the Office for National Statistics (ONS) reveals that Bharatiya continue to be the top nationality granted visas in the skilled worker category, with 56,042 granted work visas in the past year.  At 36 per cent of the total, they also represented the highest number of visas under the tailored Skilled Worker Health and Care visa. -GoTop


FOOD FOR THOUGHT: We want that education by which character is formed, strength of mind is increased, the intellect is expanded, and by which one can stand on one’s own feet. - Swami Vivekananda -GoTop 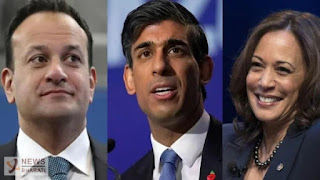